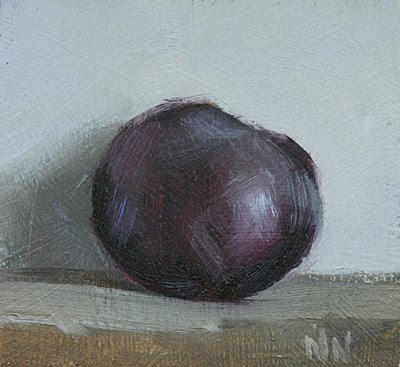 Unfortunately I haven't been able to paint and post as many of the small still life paintings as I'd hoped because for the last two months all of my time has been taken up with portraits for upcoming exhibitions, which I will post in the next week or so. Towards the end of this month I'll hopefully be able to get up to speed with these and start posting more regularly. So far I've really enjoyed doing them and I can see that I could really benefit from the discipline, so I'll look forward to getting into the habit of doing them more regularly.
Posted by NJN at 8:40 pm No comments: 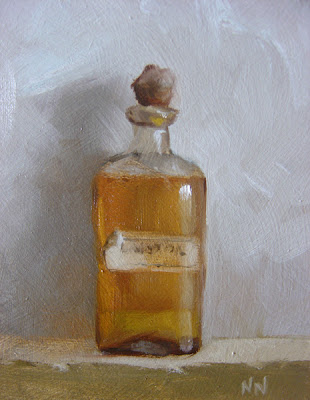 Something I have been becoming more and more concerned with recently in my painting is trying not to "over paint " a subject - to leave alone what doesn’t need to be touched. Some marks that are made on the canvas are inspired and happen just as they should, but unfortunately they aren’t always recognised for what they are and are obliterated and overpainted in the pursuit of a more “accurate” painting. The magic that can be created by two or three intelligently placed or inspired brushstrokes can be snuffed out by one thoughtless or meaningless one, and the effect lost completely. The question is; at which point do you sacrifice the absolute accuracy of the object you are painting for the artistic and creative or emotional expression of the object in paint? This is the personal dilemma. On more than one occasion I have looked at photographs I’ve taken of a painting in progress, and discovered that, in some ways, the underpainting or early blocking in stages are actually more expressive of , and true to, the character of the subject than the finished piece. Sometimes, in the pursuit of realism, some of the expressive magic is lost. I think that the struggle to find a balance between creative and emotional expression, and realistic accuracy is something that a lot of artists can possibly relate to. There needs to be a certain amount of “play” between realism and the artistic vision.
In his book “The Practice and Science of Drawing”, published in 1917, Harold Speed calls this principle “dither”. He talks about the problems of a very accurate Academic style of drawing versus a less rigid, expressive approach. He says :

“It is difficult to explain what is wrong with an academic drawing, and what is the difference between it and a fine drawing. But perhaps this difference can be brought home a little more clearly if you will pardon a rather fanciful simile. I am told that if you construct a perfectly fitted engine - the piston fitting the cylinder with absolute accuracy and the axles their sockets with no space between, etc.- it will not work, but be a lifeless mass of iron. There must be enough play between the vital parts to allow of some movement; "dither" is, I believe, the Scotch word for it. The piston must be allowed some play in the opening of the cylinder through which it passes, or it will not be able to move and show any life. And the axles of the wheels in their sockets, and, in fact, all parts of the machine where life and movement are to occur, must have this play, this "dither." It has always seemed to me that the accurately fitting engine was like a good academic drawing, in a way a perfect piece of workmanship, but lifeless. Imperfectly perfect, because there was no room left for the play of life. And to carry the simile further, if you allow too great a play between the parts, so that they fit one over the other too loosely, the engine will lose power and become a poor rickety thing. There must be the smallest amount of play that will allow of its working. And the more perfectly made the engine, the less will the amount of this "dither" be.
The word "dither" will be a useful name to give that elusive quality, that play on mechanical accuracy, existing in all vital art.” - Harold Speed - “The Practice and Science of Drawing”.
Posted by NJN at 11:15 am 3 comments:

To enquire about purchasing or commissioning work, contact Neil at:

I am an artist based in Northumberland, UK.
At the moment I am working on subjects ranging from still life to portrait and figurative paintings and drawings. Generally, with a few exceptions, I aim towards realism in my work. To the best of my ability I try to paint what I see and understand about the subject. Painting, for me, is a journey towards understanding - a quest for knowledge and an ongoing struggle to understand nature and to decipher the effects of light on the world around. I try to paint as honestly as I can and bring out some element of truth and beauty of the subject I paint. I have created this blog as a diary of my progress and development, a record of the time spent in my studio and as a notebook of daily painting practice, sketches, ideas, demos, struggles and occasional ramblings.
Thank you for looking.

RECEIVE EACH NEW PAINTING IN YOUR INBOX - Subscribe to my blog...